Search & Rescue capabilities: from the UK to the world

With the recent award of the Second-Generation Search and Rescue Aviation (SAR 2G) contract by the UK Maritime and Coastguard Agency (MCA) to Bristow, who will work in partnership with 2Excel Aviation, Leonardo UK will continue to support rescue operations over the UK for years to come. The company’s involvement includes providing components for the new AW139 helicopters and the E-scan radars which equip the MCA’s customised Beechcraft King Air aircraft.

Leonardo UK has a long-established history in the Search and Rescue domain through the building of rotorcraft and electronics for domestic and international operators. This work is done by highly-skilled people at Leonardo sites across the UK, including at Britain’s only onshore helicopter manufacturing facility in Yeovil.

A heritage of rescue

From the Sea King to the SAR Queen helicopters, from Seaspray to Osprey radars, the company’s SAR heritage spans over six decades. A legacy of building robust airframes to withstand all-weathers combined with the latest-generation of on-board systems that bring security and safety to those operating and those being rescued.

In Edinburgh, the company designs, manufactures and supports world-class E-scan surveillance radars, which come equipped with Leonardo’s patented small target detection capability, allowing crews to spot shipwrecked individuals in the water at long range, even in the most difficult environmental conditions and sea states. Customers, including the UK Maritime and Coastguard Agency, are upgrading to Leonardo’s latest Osprey radar to support missions such as search and rescue, border protection, fishery and pollution patrols. 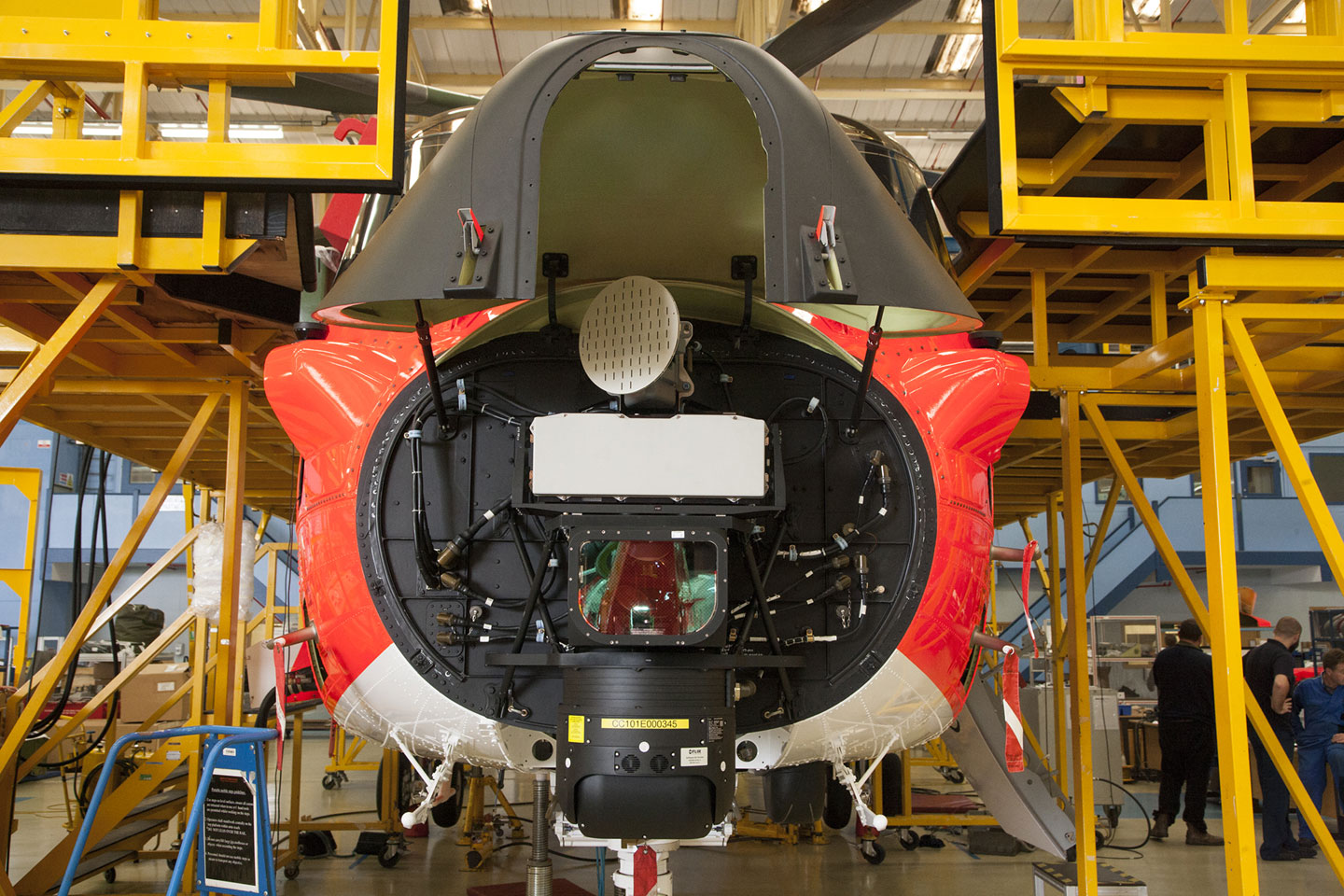 In Yeovil, the 'Home of British Helicopters' – Leonardo prides itself on its Centres of Excellence, which are at the heart of its site in Somerset. Highly skilled engineers in Yeovil specialise in blade and transmission design that support civil and military helicopters, including the AW139s being procured under the new SAR 2G contract, the AW149, AW189, AW101, and AW159 amongst others.

Adam Clarke, Managing Director of Leonardo Helicopters UK, commented: “Leonardo in Yeovil has a long heritage of supporting global operators with robust Search and Rescue platforms. This history looks to continue as we continue to deliver AW101s to the Norwegian Ministry of Justice and Public Security, the “Cormorant” to Canada, and components for the SAR 2G AW139s. These highly-capable aircraft wouldn’t be possible without our highly-skilled workforce in the South West of England.”

Leonardo in Yeovil has almost 160 trainees across its early careers schemes. The company’s apprentices and graduates comprise a proportion of the 3,100 strong workforce on-site in Somerset.

With an engineering heritage evolving from the Westland Whirlwind and the Westland Wessex, combined with the flight control system developed by Leonardo and Louis Newmark, the Sea King has had a significant advantage over other similar platforms in terms of stability and capability in all weathers. With over 50 years of operational service, the Sea King is an extraordinary example of the aeronautical excellence developed over the last century at Leonardo’s Yeovil site.

The Westland Sea King first took to the skies in 1969. Over the course of more than five decades, the aircraft has proven to be trustworthy and reliable, and has seen service with the UK MoD and eight international operators, with over 340 aircraft being delivered. It has not only stood the test of time, but has bridged the gap to the latest-generation AW101 helicopter.

The AW101 is one of the most advanced SAR helicopters and incorporates technological features including its 'Anti-ice' system, electronic anti-collision system and Mobile Phone Detection and Location System. The platform is flown by Norway, Canada, Italy and the UK for SAR operations.

The AW101 for the Norway All Weather Search and Rescue Helicopter (NAWSARH) programme, referred to as the ‘SAR Queen’ was the first helicopter to be fitted with Leonardo’s new flat-panel airborne ‘Osprey E-scan radar, itself a world first. Designed and manufactured in Edinburgh in Scotland, the Osprey packs advanced E-scan technology into a compact, flat-panel package. For SAR missions, the radar allows crews to search for and identify small targets over a very wide search area. Because of its multi-mode capabilities, crews can maintain situational awareness while simultaneously conducting maritime surveillance. 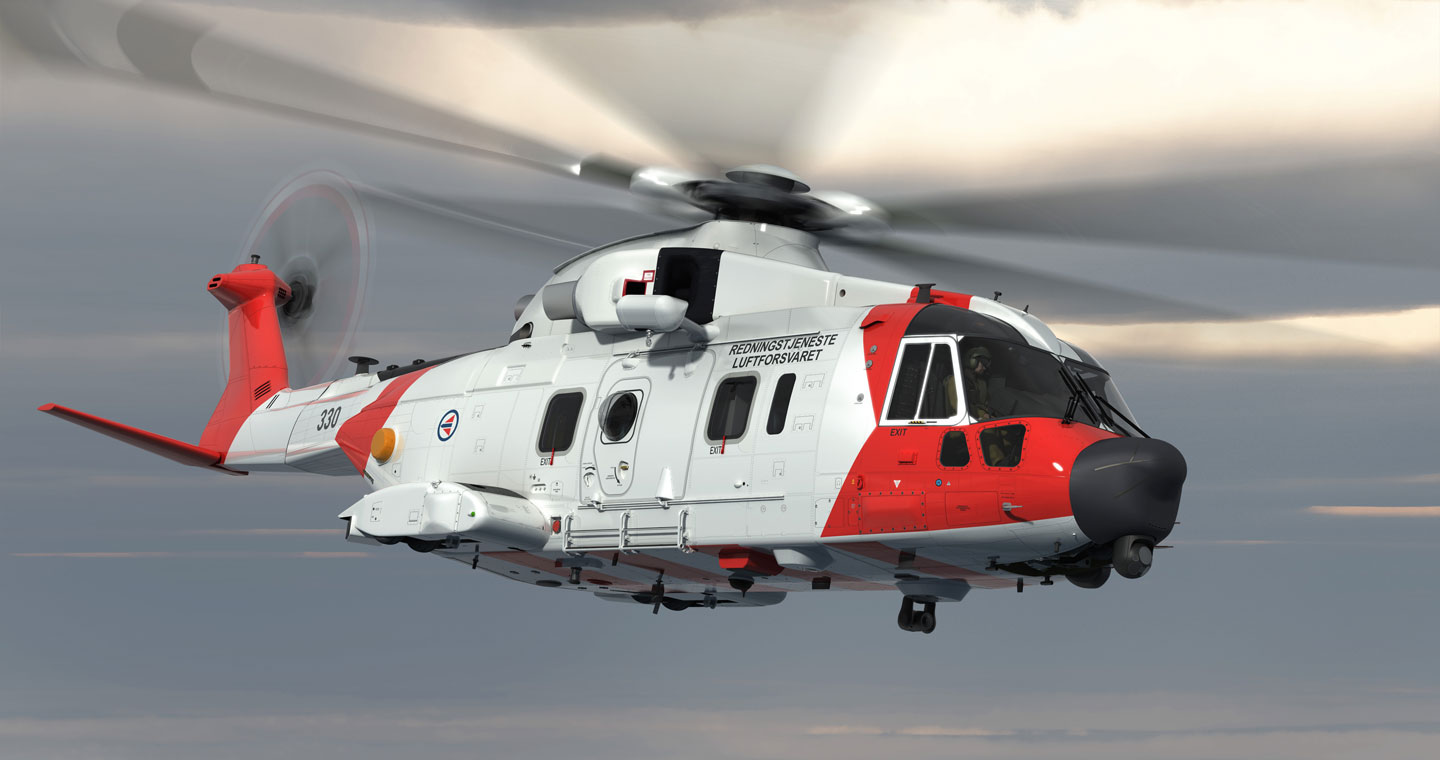 The Royal Norwegian Air Force 330 Squadron, based at Sola, has been operating the first six SAR Queen aircraft since September 2020, where the helicopter has proven its ability to conduct missions more efficiently and with less risk for the crews.

In Canada, the AW101/CH-149 Cormorant fleet has been providing reliable and crucial services since 2001. Through the contract award in December 2022 between the Canadian Government and Leonardo UK, the current fleet will now be upgraded to the most advanced version of the helicopter. Canada will acquire additional airframes/parts to increase its existing fleet size from 13 to 16 aircraft.

The helicopter’s cockpit is equipped with systems of synthetic representation of the real world with five large displays where pilots view 3D images, populated from pre-loaded maps installed on the on-board computer. During flight, obstacles will be reproduced even in low light and reduced visibility conditions, significantly increasing the pilot's awareness of the operational situation.

Through its automatic stability corrections, the AW101 can carry out a recovery mission whilst keeping the aircraft stationary during the delicate phase of winching. Another strength of the AW101 is the capacity: its dimensions (27 m3) allow the carrying of over 50 standing passengers.

Search and rescue in the UK

During 2014-18, ten AW189 helicopters were built in Yeovil for the UK's Search and Rescue service operated by Bristow on behalf of the MCA. In December 2022, Leonardo announced that Bristow Group Inc. had signed a contract to procure six AW139 intermediate twin engine helicopters to support the MCA’s Second-Generation Search and Rescue Aviation ("UKSAR2G") programme. 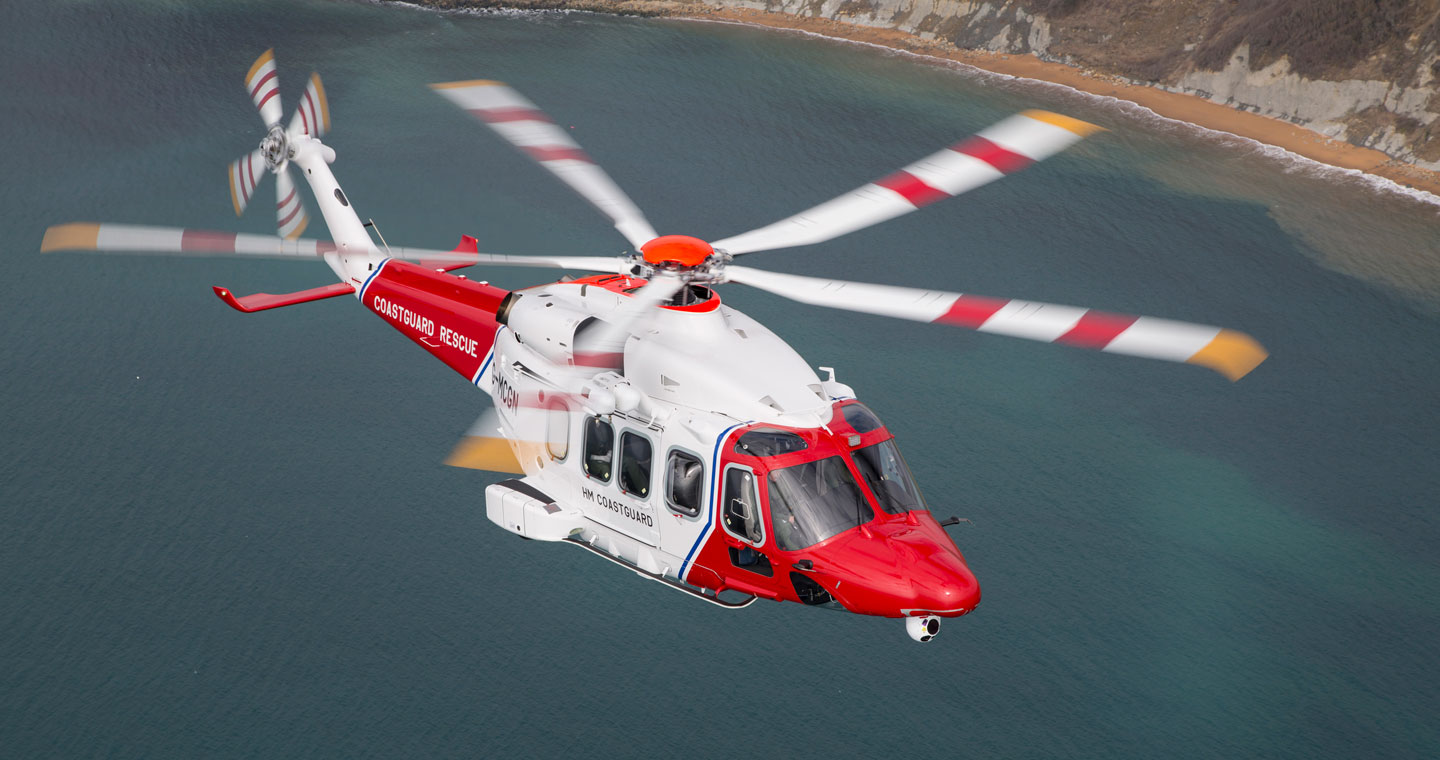 Aircraft’s deliveries are expected to start in 2023 and to be completed in 2024, joining an existing fleet of the nine AW189 super medium twin-engine SAR helicopters as part of the UKSAR2G programme.

The aircraft will also undergo a mission system integration to be carried out by Bristow in partnership with Nova Systems after their delivery, ensuring an even greater involvement of UK-based industry.

Furthermore, the Transmissions Centre of Excellence based at the ‘Home of British Helicopters’ in Yeovil continues to be the main hub of manufacture and test for the AW139 intermediate and tail gearboxes. In addition to the support of the repair and overhaul activity and ongoing airworthiness through the design and manufacturing engineering teams.

Leonardo has been serving the Search and Rescue community in the UK, and beyond, for decades and this looks set to continue as customers like Canada, Norway, the UK, incorporate the latest generation SAR platforms and electronics into their respective fleets.