With Queen’s Awards for Enterprise in Innovation and International Trade, Leonardo’s Edinburgh site employs approximately 1,800 employees who specialise in the provision of multi-role surveillance radars and countermeasure systems. Originally built in 1943, the site has a rich heritage of innovation, and today it produces world leading technology, including lasers for the US Army’s Apache helicopter, CAPTOR radar for the Typhoon, the Osprey radar for Norway’s all-weather search and rescue helicopters (NAWSARH), the Seaspray Radar for the US Coast Guard, and the Raven radar for Saab’s Gripen Fighter aircraft.

Trams offer a frequent and reliable service linking the airport and the city centre, with rail service interchanges at Edinburgh Park and Haymarket stations. Other stops include Murrayfield Stadium and Princes Street. Edinburgh train station provides rail access to all of Scotland’s major cities, as well as to Liverpool, Manchester, Birmingham and London. Edinburgh Airport is served by many of the major airlines and low-cost carriers, with domestic flights, as well as flights into Europe and around the world. 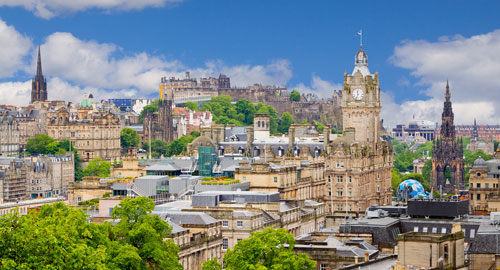 Edinburgh is the only UK city to appear in Deutsche Bank’s top ten list of cities which offer the best quality of life in the world. The study looked at everything from the cost of living, pollution and climate to house prices. But even if you put these considerations aside, those visiting Edinburgh for the first time are usually struck by the sheer beauty of the architecture, and the vibrant atmosphere of Scotland’s capital.

The city is home to the world famous Edinburgh Festival, which attracts the best comedy, theatre, art, dance and literature around the world. With cinemas, theatres, museums and an enviable night life, you have the best entertainment on your doorstep. You could be shopping in a high end store on High Street and within ten minutes you can walk through a park, or breathe the fresh air on the top of Arthur’s Seat, an extinct volcano steeped in the legend of King Arthur.

Edinburgh was also recently named as UK’s most walkable city, in a survey of the UK’s ten largest cities. Perhaps the best thing that Edinburgh offers you, is the freedom to live as you choose in a beautiful landscape which is always changing. The city offers a unique balance between urban and rural life and is easily commutable from the surrounding regions such as Midlothian, East and West Lothian, and Fife.

We offer job opportunities at our Edinburgh site covering a variety of job roles at all levels – from interns and apprentices to highly qualified professionals – including engineers, programme and project managers, IT business analysts and many more.

Click here to view our latest roles in Edinburgh