Leonardo has had a presence in Bristol, south west England, since 2011. Located within walking distance of the UK MoD’s Abbey Wood site, the office is the focal point for Leonardo’s engagement with Defence Equipment & Support (DE&S).

Bristol is the headquarters for Leonardo's UK Cyber and Security team, with its staff of 150 mainly focused on cyber security, homeland security, automation as well as a small population of Simulation & Training specialists. Employees can benefit from networked hot desks, meeting rooms, a training and demonstration suite, and a board room.

The city is well served by road, rail and air, with the office being a two-hour drive from London, while Bristol Parkway and Bristol Temple Meads train stations provide rail links around the UK. Bristol Airport offers domestic UK flights, as well as flights to all the main European destinations, including Leonardo’s head office in Rome. 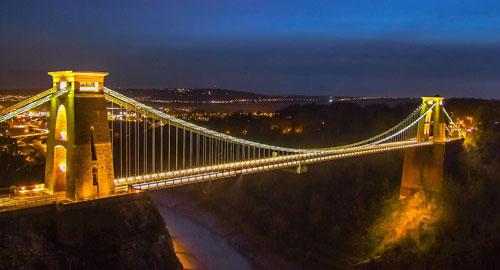 Bristol topped the list in the Sunday Times Best Places to Live Guide 2017. The South West city was revealed as the most desirable location in all of Britain in the second instalment of the Guide, beating “stiff competition” from London and other major UK destinations.

One of the 19th century’s most famous and innovate engineers, Isambard Kingdom Brunel, had a close association with the city of Bristol. His ship, the SS Great Britain, is now a museum in the city docks. The harbourside is now an attractive, modern development filled with restaurants, bars, shops and hotels.

Anyone who enjoys the theatre can visit the Bristol Hippodrome – one of the country’s top provincial theatres, which hosts many major West End and Broadway productions. In fact, Hollywood legend Cary Grant (originally named Archibald Leach) was born in Bristol, and had his first theatre role at the Bristol Hippodrome.

For students, the city boasts Bristol University, which is ranked in the UK’s top 30 universities, and the University of West England, which offers a variety of highly respected courses across many subjects.

We offer job opportunities at our Bristol site covering a variety of job roles at all levels – from interns and apprentices to highly qualified professionals – including engineers, programme and project managers, IT business analysts and many more.

Click here to view our latest roles in Bristol