The importance of STEM in saving lives

Leonardo Miysis DIRCM Campaign Manager, Tom Nash, is a former Royal Air Force navigator and a volunteer with the Tweed Valley Mountain Rescue Team. As part of Big Bang Fair 2022, Tom explains how studying Science, Technology, Engineering, and Maths (STEM) subjects has made a significant positive impact on his career, and the pride he has in continuing to work with STEM outreach programmes.

Throughout my childhood, I wanted to be a vet; I found out which subjects I needed to pass at school – namely ‘the Sciences’ and Mathematics – and decided to study Chemistry, Biology, Maths and Physics at GCSE and A-Level. What I did not know when I made those choices at the age of 14 was how vital they would become beyond my initial career choice.

Having been unsuccessful in getting a place at university to pursue my childhood dream of studying veterinary science, and with my total academic focus to that point being shattered, I started to consider what my career path could look like. Within months, I had joined the Royal Air Force (RAF) as a navigator and ended up flying Tornado GR4 fast-jets for a decade, spending a significant amount of time flying in hazardous and combat environments around the world. So how did my STEM subjects help me with this? 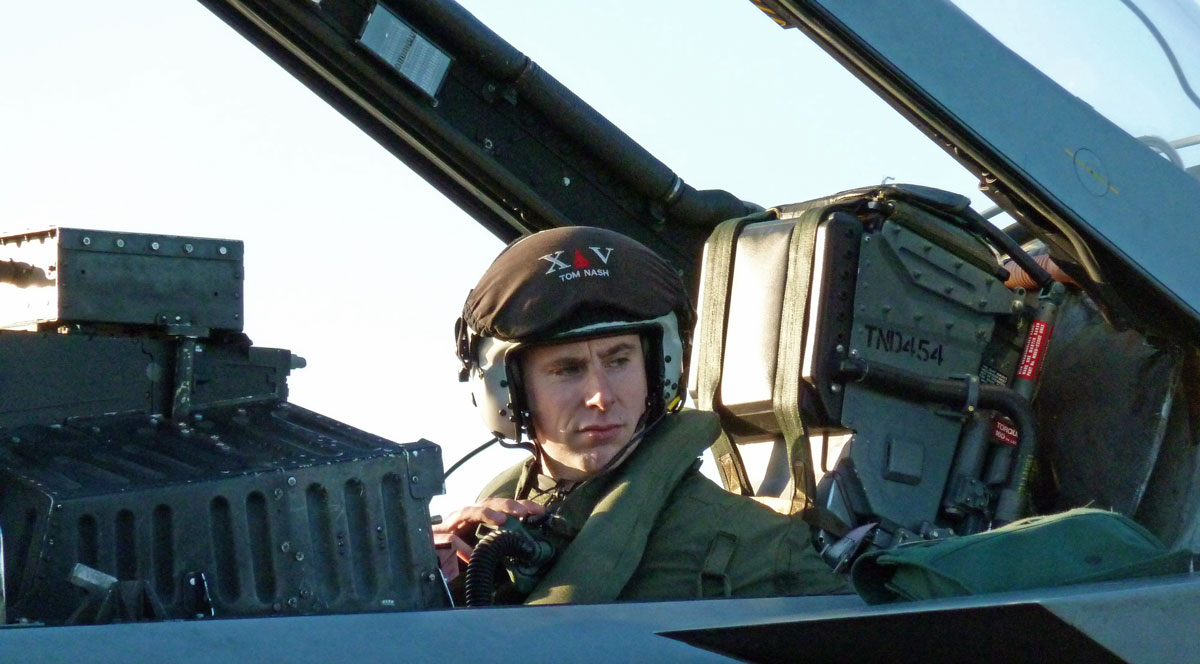 Firstly, if I had not studied science and mathematics, then I would not have even been in a position to apply for a role as aircrew in the RAF, since qualifications in mathematics was an entry requirement. As my career developed and I upskilled and studied to become an electronic warfare and qualified weapons instructor, having a good basic grasp of STEM subjects meant the learning curve – when it came to understanding, and being able to teach the complexities of multiple self-defence, electronic warfare and weapon systems – was greatly reduced.

More importantly however, from the moment I stepped foot into a Bulldog trainer aircraft in 2000 for my very first flight, I felt secure in the knowledge that the engineers and technicians who had the same love of STEM as I did had given me an aircraft that was safe, capable and able to conduct its mission.

Fast forward a few years, and I was back studying, this time focussed on the science and technology of aircraft self-protection electronics, as I became an instructor in that field. The role consisted of in-depth learning about how adversary systems and technology might affect the safety of aircrews and how, through the technology we could help develop, could create protection measures and systems to help keep the aircrews, aircraft, passengers and missions safe. I worked with some incredible people during that time, in many fields of specialisation, from system and software engineers to technology specialists, individuals with multiple doctorates to industry partners, as well as scientists and mathematicians, all of whom harnessed this incredible pool of brainpower to deliver vital equipment that keeps aircrews safe.

Whether flying over deserts on Christmas Day, or as a passenger in a Chinook crossing Helmand Province, my life was reliant on the practical application of STEM knowledge. I have worked with so many different communities of people, all creating aircraft systems and sensors that save lives, and carefully training aircrews so they can make best use of these protective systems. Indeed, in a voluntary role beyond work, I have helped introduce drone technology into Scottish Mountain Rescue teams to expand the ‘toolbox’ for search managers to help find lost and injured people whilst also reducing risk for team members – all in the same vein to harness emerging technology to help save lives.

Leonardo’s Edinburgh site is dedicated to developing the next generation protective technology that saves lives, such as our Miysis Directed Infra-Red Counter Measure (DIRCM), designed to rapidly defeat incoming heat-seeking missiles. I feel that being part of the Miysis DIRCM team is a natural extension to my experience in the Royal Air Force. The team was recently recognised with a Queen’s Award for Innovation – something not only testament to the incredible people involved, but also the vital element STEM plays in saving lives.

I am surrounded by incredible, bright, talented people with a huge passion for developing, manufacturing and delivering life-saving capability to customers around the globe. Here are just some of the people I am proud to call my colleagues and who have also had the chance to carve out an exciting career thanks to their love of STEM.

Danielle Fraser, now a Principal Systems Engineer, joined the company as a summer student in 2016 and returned for the Graduate Development Programme in September 2017. From an early age, she was interested in learning how the things around her worked and why the world is the way that it is; this curiosity eventually led her to study physics at the University of St Andrews.

“I stumbled across Leonardo by accident, learning about some of the Masters programmes at St Andrews that they worked closely with. I remember thinking, ‘This is what I want to do. What could be more exciting than working in a world-leading technology industry in aerospace?’ I was apprehensive about taking a job in the engineering sector, having studied for a physics degree with a strong focus on optics. Fortunately, my worries were unfounded and I was able to apply my skillset in a different way. The engineering aspects have been very much a crash course, but technically I was shocked to learn how much of my degree was applicable to my work.”

Dr John Maclean, Miysis DIRCM Capability Manager, has been part of Miysis since inception with decades of experience in both the academic aspects and practical application of STEM.

“I chose to join Leonardo because they offered an engineering role that allowed me to continue and expand my knowledge of physics, which was my degree course at university. As a systems engineer, I was involved in early concept designs, solving difficult problems using a combination of modelling, analysis, simulation and test. I have had the pleasure to work on Miysis since the project began, writing the target-tracking algorithm, camera noise correction and calibration routines, as well as leading the design verification activity, which means proving the system performs in extreme environments. I have also attended product demonstrations around the world and supported installations onto numerous aircraft, and I now lead the future developments of Miysis to continue saving the lives of aircrew in hostile regions for many years to come.”

Michael McMahon, Senior Software Engineer, began working on Miysis in 2017 when he joined the company as part of the Graduate Development Programme.

“I joined Leonardo after discovering the company through a tour arranged by the company and my university. This was at the end of my third year, just as I was thinking about which area I wanted to work in when I graduated. Seeing the work that Leonardo does first-hand, and knowing that these products go into aircraft to keep people safe, was incredibly inspiring. I use aspects of STEM every day within my role working on Miysis – from writing new functionality that improves the systems performance to being hands-on in the lab developing and running tests to ensure we create the safest product possible. Without the skills I developed within STEM, none of this would be possible.”

The things that ties all of us together is STEM – these subjects are weaved throughout everything we design, develop, produce and operate. It is not only within the more obvious areas of engineering; maths especially is vital for many other areas of our business, such as bid development and finance.

What may sometimes be perceived as a specialist set of school subjects can lead to a fascinating world of cutting-edge technology, huge diversity of people and backgrounds, and work often thought of as the preserve of rocket scientists. Those rocket scientists are real people, in real jobs, making a real difference – this could be you.

Come and Meet Us

To demonstrate the technology behind Miysis DIRCM, and explain its role to the next generation of engineers, we recently unveiled our new ‘Sense and Detect’ exhibit. Making its debut at the Big Bang Fair on 22 June, this exciting new activity is one of many that we have built to engage younger audiences with STEM and get them thinking about their next steps in education. The demo will be making its next appearance at the Royal International Air Tattoo (RIAT) 2022, from 15 to 17 July – visit our stand in the TechnoZone to find out more. 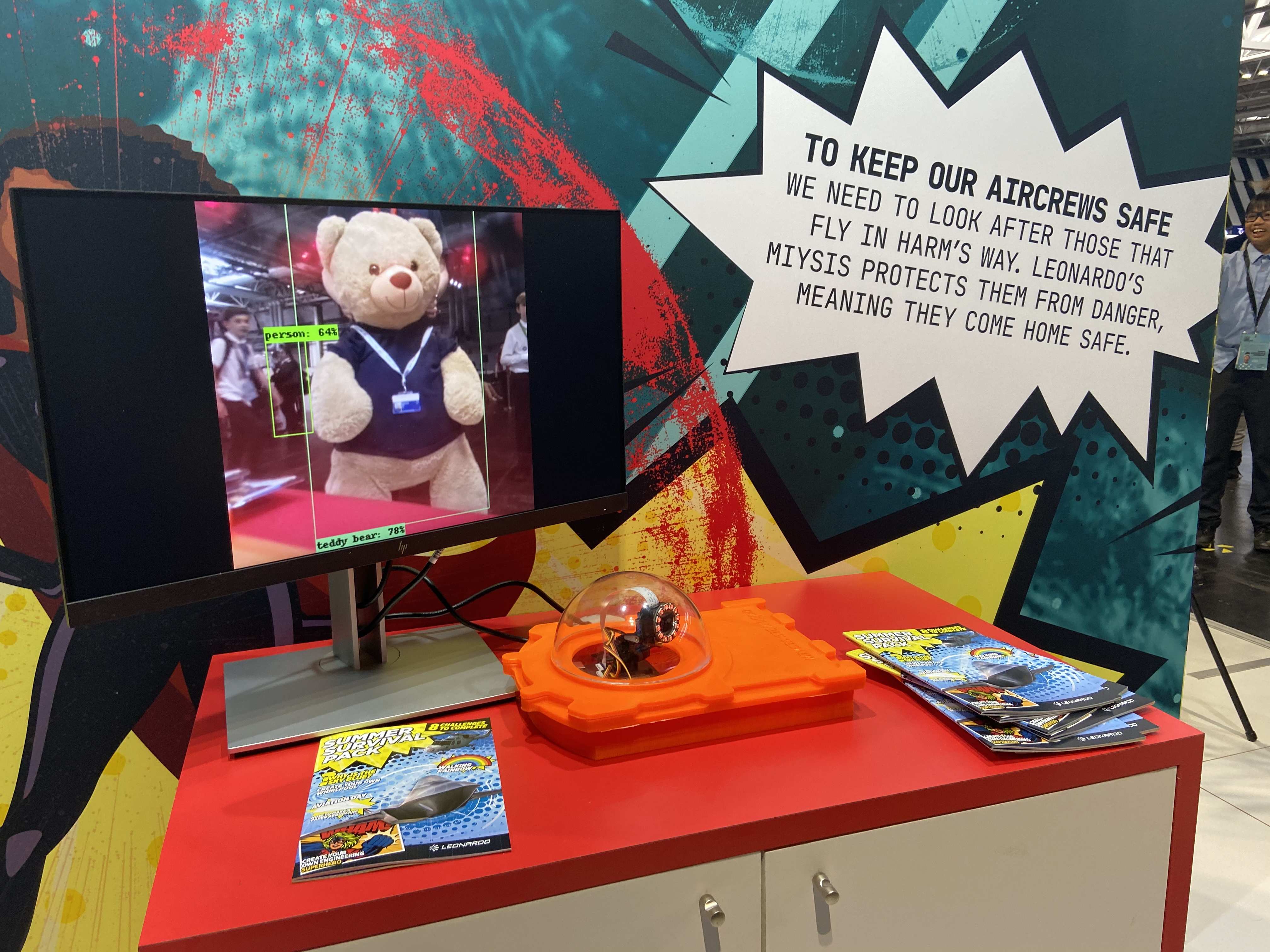 Thanks to the vast array of knowledge and experience built up at its site in Edinburgh over nearly 80 years, Leonardo’s Centre of Excellence in Scotland is today the fulcrum for development of the world’s most advanced Directed Infrared Countermeasure systems.

A Directed Infrared Counter Measure (DIRCM) uses a sophisticated laser to disrupt the incoming IR ‘heat-seeking’ missile’s ability to commence, continue or reacquire tracking on an aircraft’s heat signature. This disruption results in the missile missing the aircraft, ultimately saving the mission and bringing the crew home safe.