Alice, a student at Leweston School in Sherborne, Dorset has been selected as the national winner of a Leonardo school competition due to the creativity of her design.

School students across the UK were asked to submit designs for the livery of a Leonardo helicopter, sharing details of why their idea would help the helicopter perform its role.

Alice’s entry stood out, due to the striking helicopter she created with bright and bold colours that played a practical role in helping the helicopter perform its search and rescue mission. She chose a green and blue colour combination, selecting red lettering against a green background. Because green and red are opposites on the colour spectrum, this means that people in the water will be able to see the word ‘rescue’ more clearly. The front of the helicopter’s design features waves reflecting its search and rescue role and her distinctive green and blue design makes it instantly recognisable, helping to speed up rescue missions. 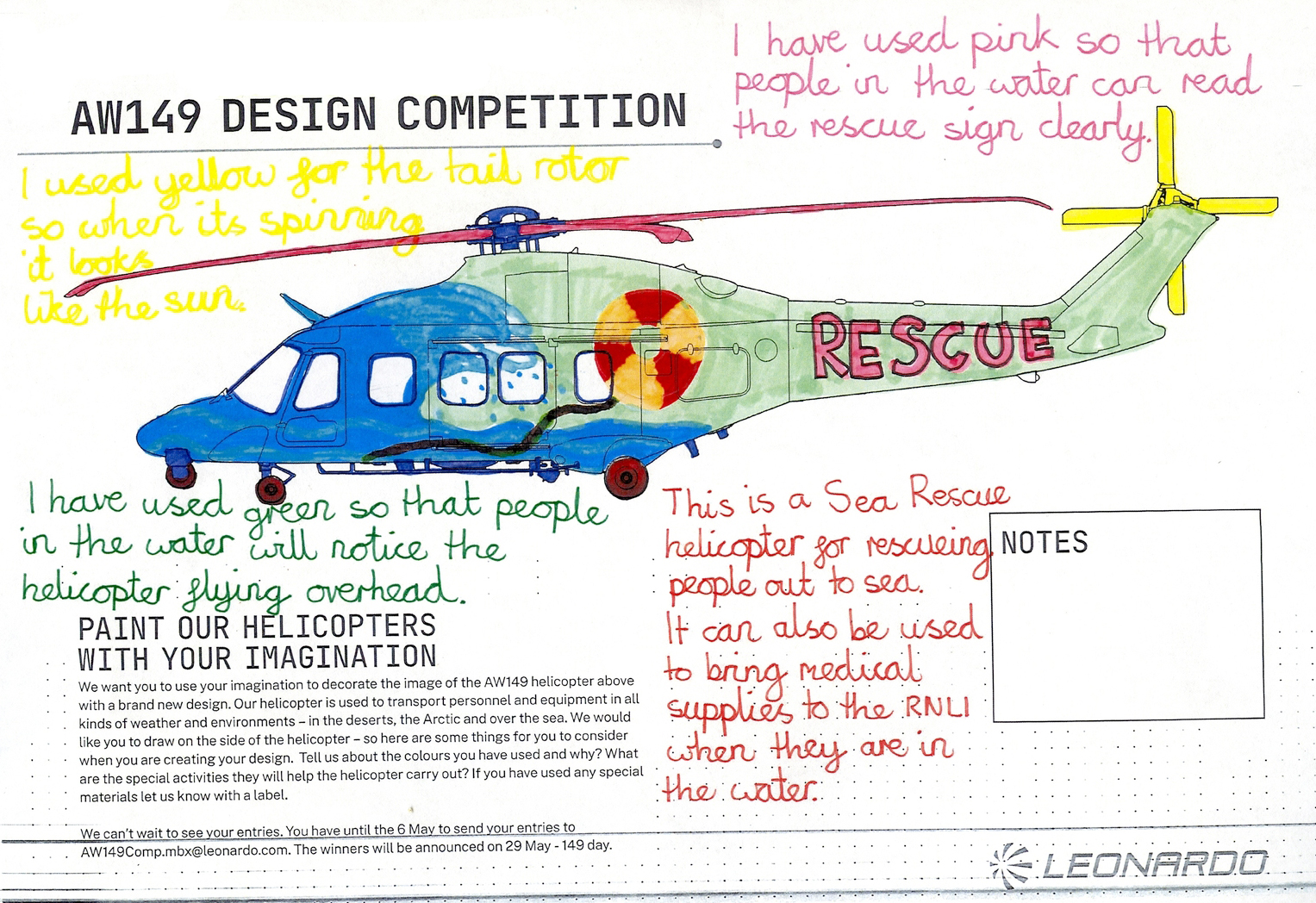 Competition winner Alice said: “I felt surprised, shocked and very, very happy to win. I was over the moon and it makes me want to design more things in the future!”

Alice received £500 of book vouchers for her school and she was presented with a model of the Leonardo AW149 helicopter. STEM Ambassadors Jordan Goble and Charlea Boucher presented Alice with her prize and went on to deliver a presentation on engineering to Alice and her classmates.

Jordan and Charlea were inspired by the school students’ enthusiastic response, as they explained that everything the children could see around them, from the toothbrush they use first thing in the morning to the transport that drove them to school had been engineered.

At the start of the presentation, they asked the class to put up their hands if they knew what an engineer did. With only a few hands raised, students seemed uncertain of what engineers do in the wider world. Therefore, Jordan and Charlea walked the children through Leonardo’s activities in Yeovil from the creation of rotor blades to helicopters that fly. They also referred to innovation in the wider world, such as driverless cars and brain-controlled computers.

At the end of the session, the children were asked again what they thought engineers did and Jordan and Charlea were pleased to see a flurry of varied responses. This proved they would not only absorbed the details of an engineer’s role, but also understood why engineers could shape the modern world in the future.

Kirsten Le Poidevin, Science Teacher at Leweston School, said: “The students really enjoyed designing the AW149s. We had a very diverse set of entries, including a ‘Pet rescue’ version. The students could not believe that someone from their school had actually won the competition! We really enjoyed Leonardo’s visit to the school and learned a lot about the diverse life of an engineer – I think we may have a few future engineers as a result. I am sure Alice’s model has taken pride of place at home and we looked forward to purchasing some inspirational STEAM (Science, Technology, Engineering, Arts, Maths) books with the vouchers Alice won for the school.”

Military helicopters must be equipped to perform the most demanding missions in the harshest operating environments. The AW149 is a latest-generation medium multi-role military helicopter that delivers the highly effective and survivable capability required by today’s armed forces, combining advanced technologies, equipment and weapons with unparalleled safety and performance characteristics.