Designed from the outset to meet a wide range of demanding missions on the modern battlefield, the Leonardo AW149 multi-role helicopter provides a layered approach to survivability.

In the first of a two-part series analysing the AW149's survivability, we look at how the platform was designed with battlefield survivability in mind, with a focus on the airframe’s crashworthiness and minimised susceptibility to enemy fire, in addition to its unparalleled gearbox run dry capability.

Commonly known in military circles as the ‘Survivability Onion’, the diagram below represents the successive layers of a platform’s survivability defences. 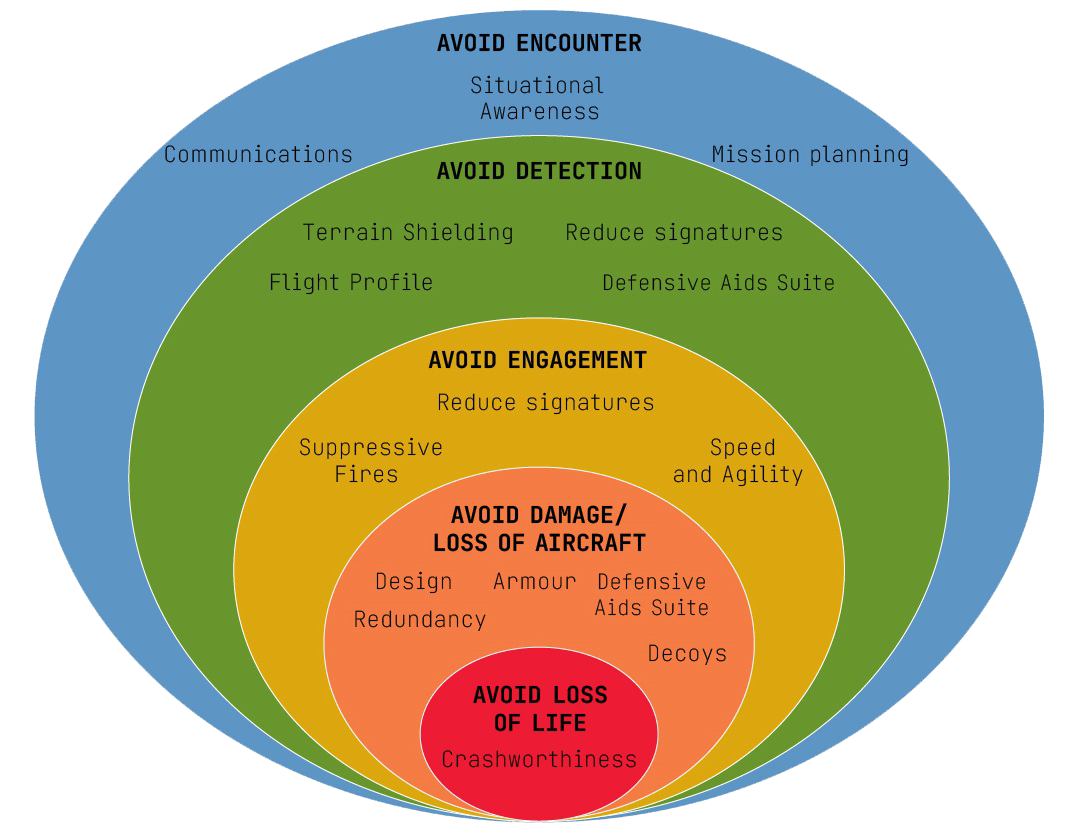 Figure 1: A representation of the 'Survivability Onion' for aircraft

In designing aircraft, Leonardo’s approach is to consider the Survivability Onion from the inside out, as the features on the inside must be considered at the earliest stages of the airframe’s design process.

Whilst some elements of survivability can be improved, with the addition of role-fit mission equipment, this article highlights that it is not viable to retrospectively modify an existing aircraft to meet military crashworthiness and survivability standards if they have not been taken into consideration during the original design.

From the start of its development, the AW149 was designed to meet the most exacting military crashworthiness standards set by the UK Ministry of Defence (MOD) and our international military customers.

Mike Overd, Leonardo’s Chief Engineer for UK Military Aircraft, explains: “The AW149 has a robust undercarriage design which is able to withstand the very high descent rates typical of military requirements. By incorporating multiple and energy absorbing load paths in our airframe, we can demonstrate at least 90th percentile crashworthiness performance for all of DEFStan 00-970 crash case requirements; covering a number of different impact angles/attitudes. This means that in 90% of all survivable crashes, the crew and cabin occupants will survive. For a typical troop transport aircraft, where ordinarily heavy mass items such as engines and the main gearbox are located above the cabin, 90th percentile is a very good result.

“The aircraft also has outstanding emergency egress routes and, for operations over water, can be equipped with flotation systems enabling safe ditching egress in conditions up to Sea State 6.”

At the design stage of the AW149, Leonardo used a high fidelity ‘Digital Twin’ to simulate the effects of different crash cases. When evaluating the crashworthiness of different aircraft types, the benchmark for comparison is the pure vertical crash case. Leonardo has simulated a vertical crash at a speed of 42 feet per second. This represents the 95th percentile crash case and the results showed all heavy mass items [including engines and the main gearbox] remained attached to the structure and the structure itself remained intact – allowing crew and passengers safe egress from the cockpit and cabin.

This simulation was subsequently compared with actual observed behaviour of a crash test that witnessed a fuel cell dropped from 50 feet. In this case, it hit the ground at 56 feet per second on impact, which is 34% higher than the maximum speed required in DEFStan 00-970. The structural failure modes and deformations in the test correlated extremely well with the simulation results. Once again, the cabin remained intact. In addition, AW149 fuel tanks and fuel cut-off features are designed to prevent fire in the event of a crash, and are compliant to international MIL standard 1290A.

Above and below: The results of observed versus simulated fuel cell crashworthiness demonstrate a high level of accuracy in predicted structure deformation and as a consequence AW149 compliance with DEFStan 00-970 crashworthiness requirements.

"It’s an important factor to remember," Mike emphasises, "that 95% of all survivable crashes are going to be less severe than this vertical crash case, so we have a very high confidence level that the occupants can survive the vast majority of crashes.

"As the only military rotary wing manufacturer in the UK – with a unique skillset gained from over 100 years of designing, developing, testing and manufacturing military aircraft – Leonardo’s ability to simulate tests like this, to such a high degree of accuracy, minimises cost and lead-time in the development of new equipment."

As well as ballistic tolerant components, the AW149 boasts excellent redundancy of its critical systems, which are separated from one another on the platform. This ‘safe separation’ minimises the risk of flight-critical systems being disabled from small arms fire during operations.

In addition to optimised material selection and inherent design strength, the AW149 offers:

“During the initial design of the AW149, to ensure low vulnerability, we simulated the aircraft behaviour using the same modelling techniques used by UK MOD,” adds Mike. 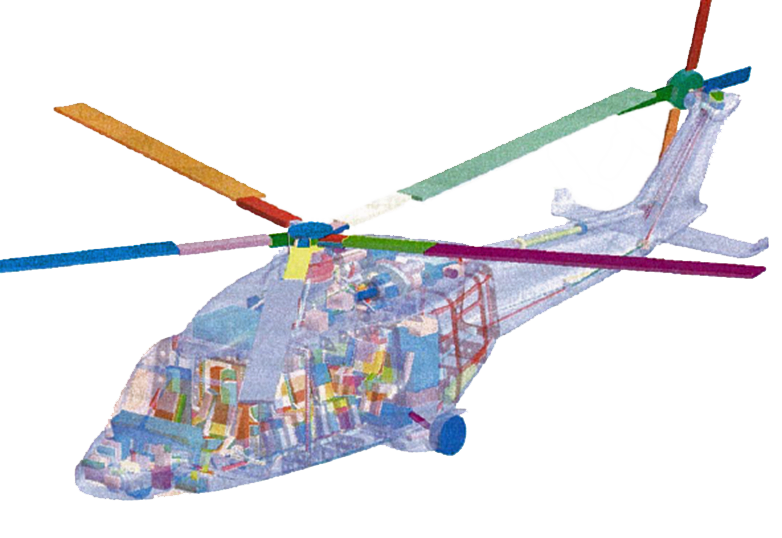 "We looked at a comprehensive range of threats up to 12.7mm armour-piercing incendiary bullets, and we’ve considered 360-degree azimuth and +10 to -40 degrees of elevation.

"The simulation also considered categories including loss of controlled flight, and inability to complete the mission, with results showing the AW149 has an exceptionally low vulnerability and excellent protection at different altitudes."

During operations in hostile environments, main and tail rotor blades are two of the most frequently hit parts of any helicopter. Leonardo’s analysis has demonstrated that the AW149’s blades can withstand 12.7mm armour-piercing incendiary bullets – not just to the trailing edge, but damage to the spar; the main load carrying elements of the blades.

Residual strength tests demonstrate that even in the event of this damage, the AW149 blades can withstand all the stresses and strains associated with a full mission profile for over 90 minutes of flight and still be able to land safely.

Likewise, the AW149 main, intermediate and tail gearboxes can continue operating safely at cruise flight power in the event of oil loss caused, for example, by a bullet strike.

The aircraft gearboxes can continue running with loss of lubrication for up to 50 minutes. This equates to approximately 100 nautical miles safe flight, which could mean the difference between a forced landing in a hostile zone and being able to land in a friendly zone. 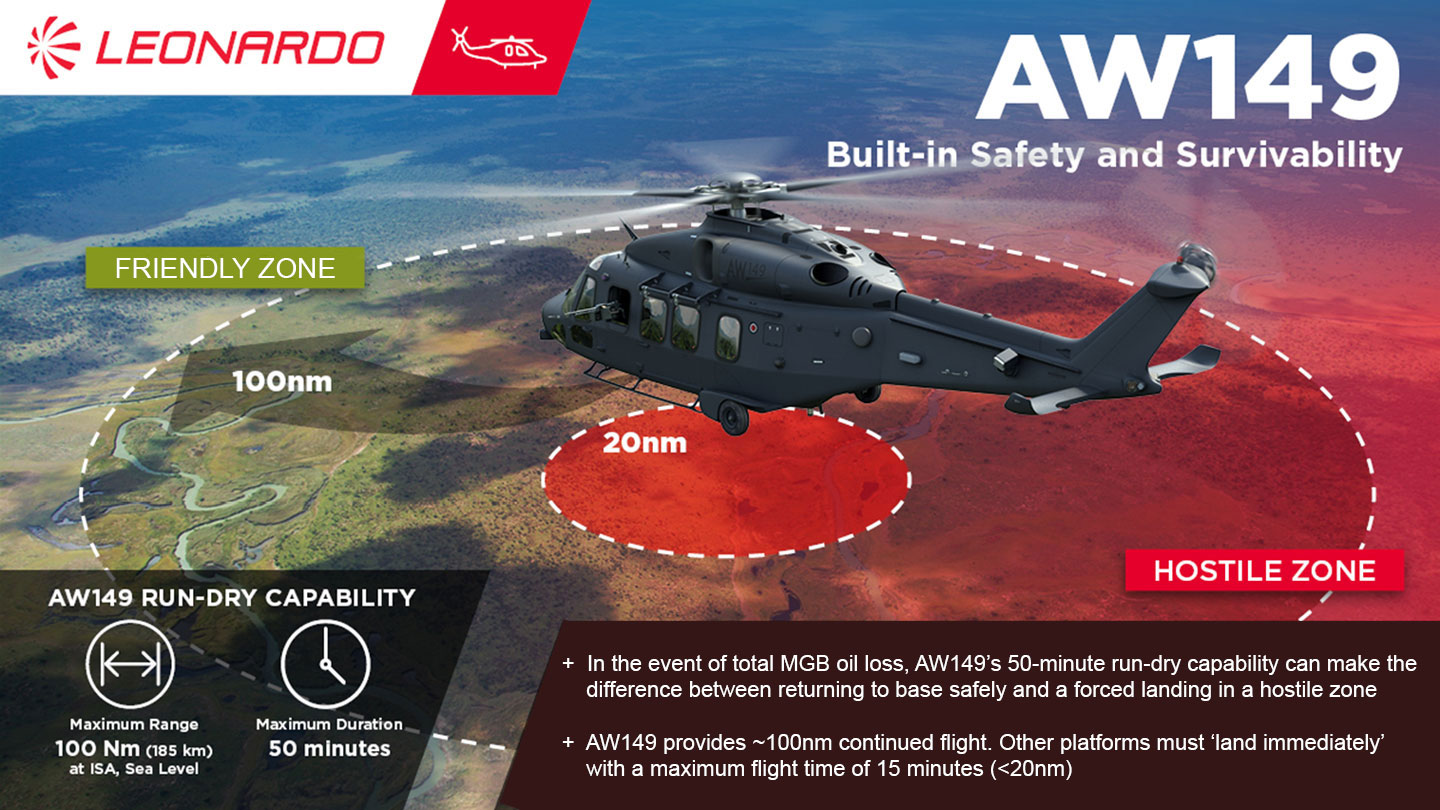 These key survivability features of crashworthiness and minimised vulnerability to small arms fire form part of the integral design of the AW149 – ensuring the aircraft is ready for military operations. If not considered from the outset, it is not viable to retrospectively introduce these features onto an existing platform and meet the level of survivability required.

In part two of this series, we further explain how the AW149 was designed from the outset with a battlefield survivability focus. In particular, we will focus upon the AW149 exhaust Infrared Suppression System and Defensive Aids and precision external weapons capabilities.

In the second of a two-part series analysing the survivability of Leonardo's latest-generation AW149 multi-role helicopter, we explain how a reduced exhaust Infrared signature, next generation Defensive Aids System and external weapons options will protect the aircrew and aircraft by avoiding detection and engagement in the most severe operational environments.

Read the article in full

Military helicopters must be equipped to perform the most demanding missions in the harshest operating environments. The AW149 is the latest generation medium multi-role battlefield platform that delivers the highly effective and survivable capability required by today’s armed forces, combining advanced technologies, equipment and weapons with unparalleled safety and performance characteristics.