The airborne Search and Rescue (SAR) sector could be transformed, thanks to new award-winning technology developed by Leonardo and Smith Myers Communications which can locate a casualty through their mobile phone location, even when out of network coverage.

For many of us, we now run our lives through our mobile phone – it organises our daily existence, monitors our health and fitness, manages our home heating system, orders shopping and tells us what’s on at the local cinema.

Now, thanks to technology developed by Leonardo Helicopters in Yeovil and Smith Myers Communications, a standard mobile phone could help save your life.

First Installed on the Norwegian All Weather Search and Rescue Helicopter (NAWSARH) AW101 fleet, the Redstreak Mobile Phone Detection and Location System (MPDLS) turns every mobile phone into a rescue beacon, enabling a Search and Rescue (SAR) crew to pinpoint stranded mountaineers or marooned mariners in a response time that can be the difference between life and death.

An innovative approach to Search and Rescue

At the 2018 Royal Aeronautical Society awards (presented on 26 November), the Redstreak technology was recognised with the Society’s Silver Medal for its unique ability to help find and communicate with casualties more quickly and safely than has previously been possible. 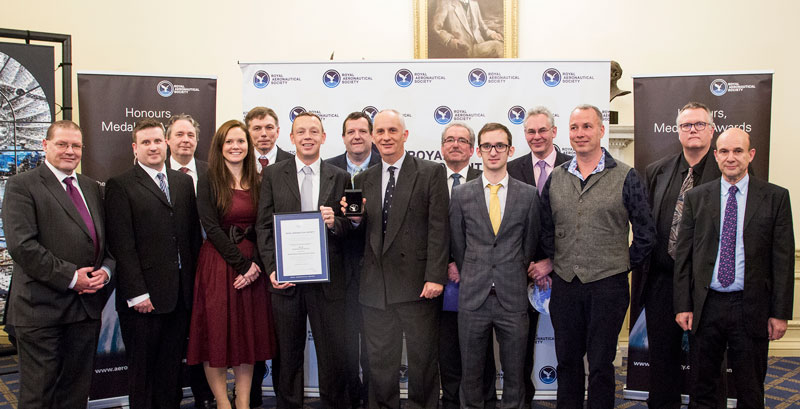 While SAR remains predominantly limited by visual search conditions and ranges, Redstreak allows anyone with a standard mobile phone to be located and then communicate with a Redstreak-equipped SAR helicopter, even when a network cellular signal is unavailable.

In essence, the SAR helicopter becomes a mobile phone ‘network', using the phone’s unique International Mobile Equipment Identity (IMEI) to identify and locate the target phone at ranges in excess of 20km. If the phone’s GPS is available, Redstreak can immediately obtain a casualty’s position. However, even if GPS is not available, the aircraft flies a simple search profile, collecting data to triangulate an initial position. As the aircraft closes in on the initial position, accuracy is refined to 100m or better. Meanwhile, during the search, the casualty can be texted or called to be given details of the rescue, as well as receive reassurance and medical advice, encouraging them to stay positive as the helicopter draws nearer.

The Redstreak team comprises experienced engineers from Smith Myers and Leonardo Helicopters, combining expertise in telecommunications, software and protocol development with aircraft systems integration and qualification. In late 2013, the team began creating architecture and equipment requirements to scope a project that took the concept through flight trials development, qualification and into production.

The trials defined techniques to prove the system works at all typical helicopter speeds/altitudes, during which it achieved ranges of over 30km, and even detected phones buried in snow. With detection not dependant on visibility, search areas are covered more quickly by Redstreak than through a standard SAR mission, and the aircraft can remain at altitude, making the entire search process quicker, safer and more effective, thus increasing the probability of a successful rescue.

Leonardo’s technical lead on the project, James Vincent, said: “Redstreak is now supporting Norway’s 16 NAWSARH AW101 helicopters being delivered by Leonardo. We’re confident the technology will be integrated on a variety of other platforms too, having been successfully evaluated in the air, on land and at sea. There is considerable interest from all our SAR customers as Redstreak allows these missions to be have a greater probability of success, increasing casualty survivability, whilst reducing mission duration and cost!”

James also highlighted the collaborative efforts of the team. “We had newly-qualified engineers through to highly experienced engineers working on this project, providing the opportunity for us to develop new talent and give them the chance to push boundaries.

“It was a huge team effort and we utilised all the experience we have in Yeovil which allowed us and Smith Myers to jointly develop such an exciting project in such a compressed timescale.

“It was also great to have the vast experience of our test pilot, Andy Strachan, who flew the AW101 that appeared in Skyfall, flying trials as we determined the extent of the technology’s capability.”