Ten years on from the opening ceremony of the 2012 Olympic Games and the release of the James Bond film ‘Skyfall’, we look back on one of the most memorable years in the history of the franchise and the role played by Leonardo.

“It all started in January 2012 with a phone call from a company that specialised in sourcing aircraft for film production companies,” says Richard Folkes, Head of Aviation Safety at Leonardo’s helicopter business in Yeovil, UK.

“At the time, I was part of the External Affairs Team at what was then AgustaWestland helicopters. In a previous life, I was an army helicopter pilot so I had some experience of both armed helicopters in general and of parachuting soldiers from the back of a helicopter. It transpired that they were looking for a ‘large green helicopter with a ramp’ and ‘did we have one?’ Clearly, the team had done their homework, and knew we had an EH101 [AW101] company demonstrator, which fulfilled that description.

“However, it became apparent to Eon Productions, the Bond production company headed by Barbara Broccoli and Michael G Wilson, that due to operational requirements at the time, a UK military owned helicopter was not going to be available to fit in with the production’s filming schedule for the 23rd outing of the James Bond series, Skyfall.”

It was then that Barbara Broccoli explained to Richard what the production needed.

“She told me that they needed, at very short notice in March, an armed helicopter with a ramp, a searchlight and a ‘Skyshout’ speaker for filming with another camera helicopter on location in Surrey.

“Our company has a heritage of being able to support the Urgent Operational Requirements (UORs) of the UK Armed Forces so, although we knew it would take a lot of quick work, we were confident we could deliver. You don’t say no when your country comes calling.”

Fast forward to Hankley Common in Surrey and the then company Chief Test Pilot, Andy Strachan, is preparing to film Skyfall’s dramatic finale where Bond villain, Raoul Silva (played by Javier Bardem) and his mercenaries, descend by helicopter on the eponymous ancestral home of Bond.

As portrayed in the film, in the evening gloom the helicopter arrives over the horizon in style with ’Boom Boom’ by British band, The Animals, blasting out from the Skyshout loud speaker. The helicopter showers the home with a hail of heavy 50 calibre machine gun fire all directed by using its powerful searchlight, before Raoul Silva and his henchmen exit down the ramp to storm Bond’s Scottish home. However, in true Bond movie bravura and ingenuity, he blows up the building ensuring the aircraft crashes into the house with an explosion of fire.

In reality, says Richard, the filming was a professional collaboration. With a highly technical and demanding formation flying sequence at ultra-low level between the camera helicopter flown by Marc Wolfe, from a company called Flying Pictures, and Andy Strachan in the Leonardo AW101 to get the shots required by the director. The two pilots quickly established a superb working relationship to create a dramatic set of sequences whilst ensuring safety at all times.

You only live twice

Sometime after filming had finished, Richard received a second call from Barbara Broccoli, and this one was even more intriguing than the first.

“I wonder if you could come and speak with my friend Danny Boyle next week?” she asked.

A few days later Richard, sworn to secrecy, was in an old warehouse turned studio in the East End of London looking at a model of what was to be iconic set of the 2012 Olympic Games Opening Ceremony. Over the next few minutes, the idea of the ‘Happy and Glorious’ story was shared with Richard.

“This is another first, I thought,” says Richard. “I could see the ambition straight away, as well as many complications – both logistical and safety – but this is Bond… it is not meant to be easy!”

At the time in 2012, the company’s AW139 was our latest aircraft in the market place but was ideally suited for the task. “This would provide an extraordinary opportunity to place it in an iconic event to a TV audience of several billions and with the prospect of even more billions of images in newspapers, articles and magazines across the globe,” says Richard.

The stunt was surrounded in secrecy. No one wanted the story to be leaked – it had to be highlight of the show and literally take people’s breath away.

However, the AW139 was not cleared by the regulators to utilise a parachute. Then there were wires and other obstacles across the Olympic Stadium, and a host of other technical and security complexities surrounding the flying of a helicopter low level through London over Buckingham Palace and the Houses of Parliament and, not least, along the Thames passing through the middle of the world famous Tower Bridge. Many discussions were had with various authorities but without giving too much away as nothing could be left to chance – not with Her Majesty’s and Bond’s reputation at stake! Much of the journey was pre-filmed before the event and was to be ‘stitched’ together with the live footage of the actual parachute drop on the night of the performance.

Leonardo’s UK Head of Internal Communications, Claire Cole, worked with Richard in the External Affairs team at the time and the job fell to her to take the role of the helicopter’s VVIP passengers during the aircraft trials.

“I remember the day like it was yesterday. Richard and I were in the office, he came up to my desk to ask me if I was ‘up for a top secret mission, don’t worry it will be fun’. Of course, my natural reaction was ‘yes please.’ The following weekend I was on my way to London as part of the ‘Olympic flying team’ to meet with the Happy and Glorious directors and fly ‘the mission’. For me, it wasn’t until we were in the room with Danny Boyle (I am a massive fan of his work) and the production team going through the sequence and frames, that it all hit me… I was going to be the stand-in for HRH Queen Elizabeth II. 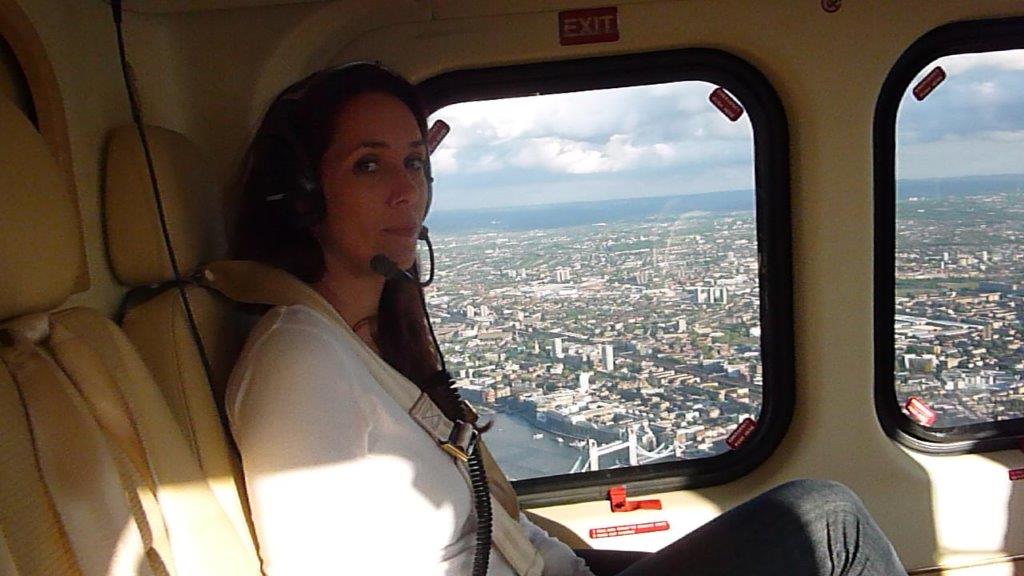 “We were positioned with the AW139 aircraft away from London at an airfield awaiting our time slot to fly into the city and excitement was in the air. There was a lot of recce flying at the start but the AW139 was a smooth ride as we flew over London taking in the beautiful views. The first filmed sequence was the shot through Tower Bridge. We made several practice approaches along the Thames and I could see the traffic stopping and people congregating to watch the spectacle. Then the time came – the bridge was closed to all apart from us. We flew straight through the middle, the adrenaline was pumping and I had to have a quick word with myself to remain regal at all times.

“After the bridge, we flew alongside the London Eye, waving to people as they enjoyed the view, over St Paul’s Cathedral, the Houses of Parliament, Buckingham Palace and many other iconic landmarks. I didn’t want to land.

“Still to this day, I believe I remain the only female to fly through Tower Bridge in a helicopter, something I ensure I bring up at any ice breaker event. A true privilege to be part of this experience.”

Nobody does it better

The spectacle was captivating with spectators experiencing the history of Britain as the stage transformed from a ‘Green and Pleasant Land’ to the ‘Pandemonium’ of the industrial revolution; a salute to the National Health Service and children’s literature; and a celebration of the UK’s pop culture, technology and the digital revolution.

And then came time for ‘Happy and Glorious’. Those in the crowd and the millions around the world watched with delight as the world’s favourite secret agent arrived at Buckingham Palace to accompany Her Majesty, the Queen to the opening of the games. Stepping into the AW139, Her Majesty and Bond fly across the Capital’s landmarks and, after passing through Tower Bridge proudly displaying the Olympic rings, they arrive at the Olympic Stadium. A wave of excitement grew around the stadium as the audience looked up as the Leonardo helicopter appeared above them. Then, with a pause of anticipation and a huge nod to the opening of the ‘The Spy Who Loved Me’, ‘Her Majesty and Commander Bond’ leapt from the aircraft and parachuted to the ground to appear shortly after in the Royal Box.

“It was one of the most stressful moments of my life,” says Richard, “because it required split second timing to fit into the pre-filmed footage and once again coordination with our friends in Flying Pictures flying alongside the AW139. Given the size of the live audience and the press attention, the consequences of it going wrong were too dreadful to contemplate! After many rehearsals over the stadium in the week leading up to the London Olympic 2012 Opening Ceremony, on the night we did our best ever performance – again a tribute to our Leonardo pilot Sam Eddings and to Marc Wolfe.”

A Leonardo AW101 was also involved on the night, given the important role of dropping confetti over the stadium.

Four months later, on the eve of the official Skyfall premiere at the Royal Albert Hall in October 2012, and before the rest of the world saw the film, around 1,000 employees gathered in Yeovil for a special pre-release screening to see ‘their own’ Bond movie.

“It was such an exciting time for the company and something we were keen to share with all our colleagues in Yeovil,” says Richard. “Our marketing team created some fantastic invitations so our employees and their families all had the chance to get that film premiere experience.”

Looking back on the tenth anniversary of Skyfall and the London Olympics, Richard is still enthusiastic about Leonardo’s association with Bond.

“It is something all of us here at Leonardo remain extremely proud of and ten years later, I still get invited to tell our story at dinners and conferences across the UK, which only goes to show the enduring popularity of the Bond films.

“The 2012 Olympics shone a spotlight on London and venues around the UK, and Skyfall is not only one of the most successful but probably the most British of all the Bond films.

“It was a privilege for Leonardo – as the Home of British Helicopters – to play a role.”