Exploiting Information to your Operational Advantage

Leonardo Capability Engineer, Sam Qaisar, looks at the constantly changing challenges facing military forces regarding the creation, dissemination and security of information in an operational environment, and the threats and opportunities that lie therein.

Modern military forces make extensive use of networked sensors and robust command and control networks to deliver timely and detailed situational awareness to commanders. This underpins the decision-making process at the heart of warfighting operations by ensuring well-informed decisions can be made by commanders at all levels.

An interesting observation is that while the need for effective decision-making exists at all levels within the battlefield, the information and equipment required to support this process is very often centralised. In a permissive environment, this does not present any problems. However, a capable military can very easily exploit this to blind their enemy and cause confusion. This has already been seen with the extensive use of Electronic Warfare (EW) by Russian forces in Ukraine which severely degraded the operational cohesion of the Ukrainian Army.

An important question to ask therefore is how does a military defend against this threat and also develop its own offensive capabilities?

An essential part of answering this question is developing an understanding of how information is created, moved, stored and used on the battlefield. In much the same way that doctrine dictates how a commander will physically deploy his troops, it is typical to find that information flows have a standard template. It is often the case in conventional forces that the “information doctrine” is less flexible than the “physical doctrine” due to the reliance on communications equipment and computer networks that have poor mobility or interoperability. This creates vulnerabilities that can be exploited in order to undermine the flow of information around the battlefield and prevent effective decision-making. The adversarial pursuit of a competitive information advantage is called “information warfare.”

The use of information warfare can lead to significant operational benefits. This can be most easily understood by considering the “Find, Fix, Finish, Exploit, Analyse, Disseminate” (F3EAD) targeting model. 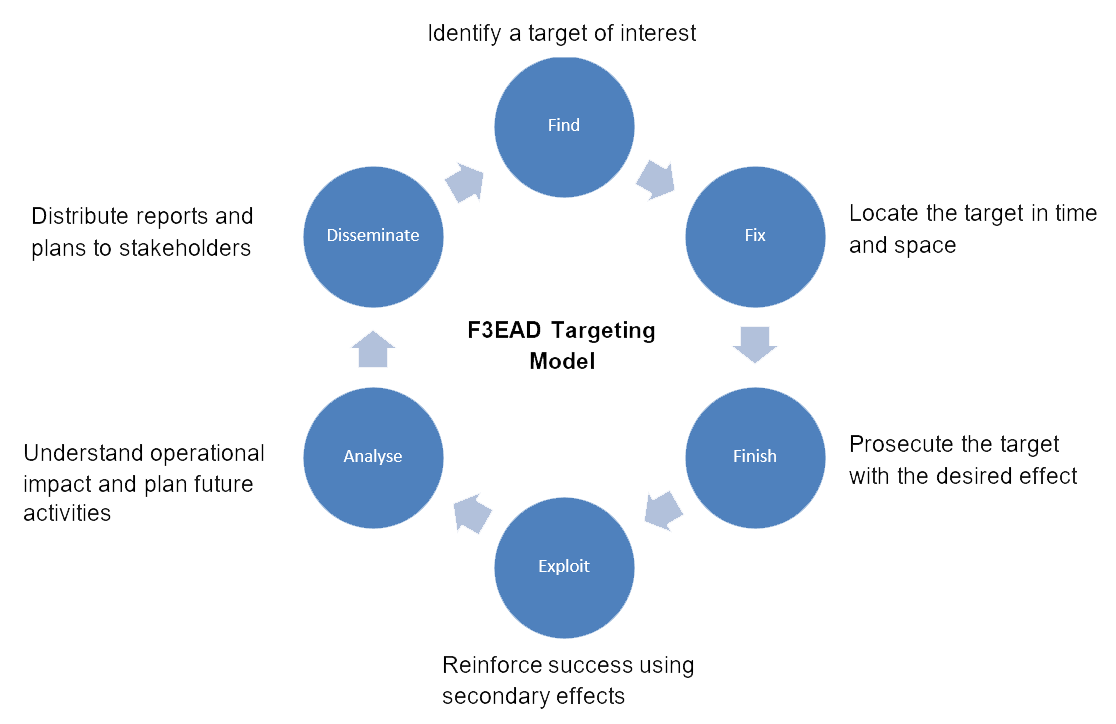 Every stage within the F3EAD process is reliant upon the timely provision of accurate information from the preceding stages. If one stage is disrupted, then the entire process is compromised and will proceed more slowly or may even be stopped completely. An example of this in an operational setting is the use of EW to prevent an air defence network detecting (Fix) and engaging (Finish) an incoming aircraft. This is an example of how information warfare principles already exist within most militaries, but are often not explicitly regarded as such.

Despite being recognised as a useful capability, information warfare is currently very poorly adopted by most militaries. Existing information warfare methods are considered secondary to physical manoeuvre, and are “enemy focussed,” relying on the clear identification of specific physical targets. There is no recognition of information as a stand-alone manoeuvre domain that can be exploited.

There is operational value in applying existing manoeuvre warfare principles to the information space to create an information manoeuvre capability. This allows for the creation of an effects-based operating model in which a military can selectively attack elements of the enemy decision-making process in order to cause maximum confusion. A key element of this is understanding information flows around the battlespace and using this to create models of the decision-making process which can be used to aid in targeting. It is important that this is also applied to friendly forces in order to identify and mitigate our own vulnerabilities. This is conceptually similar to the existing physical manoeuvre planning processes that are already in use, providing good opportunities for the creation of mutually supporting effects.

The effective exploitation of information manoeuvre requires the adoption of new tools and skills at all operational levels in order to provide a vertically integrated capability that can offer mutually supporting effects to other manoeuvre domains. The capability should include a diverse range of elements such as offensive and defensive cyber warfare, more widespread use of network analysis for targeting, and media operations. These elements already exist within modern militaries, but have not yet been pulled together into a coherent information manoeuvre framework.

The biggest obstacle to a credible information manoeuvre capability is the lack of a mature doctrinal framework to integrate existing capabilities. By providing this framework, modern militaries could unlock the full potential of information warfare.