The AW101 SAR Queen is transforming the All-Weather Search and Rescue (SAR) capability of the Royal Norwegian Air Force. Operating in some of the most demanding conditions anywhere in the world, the helicopters cover thousands of miles of coastline, fly inside the Arctic Circle and are often faced with rough seas and extreme low temperatures.

The 330 Squadron, based at Sola, has been operating the first six SAR Queen aircraft since September 2020. One member of the Squadron with vast experience on the Sea King provides first-hand insight into how the AW101 is taking SAR capability to a new level.

I have almost 30 years of SAR experience with the Sea King. Having flown the AW101 for the last two and a half years, including the last six months in the SAR role at Sola, I would argue that the helicopter improves SAR operations in every aspect. We all loved the Sea King, but we would never go back because the AW101 is like skipping at least three generations of aircraft development.

In general, it is a superb helicopter for SAR operations. Even in the short period of time we have operated the aircraft so far, we’ve been able to conduct missions more efficiently and with less risk for the crews.

In our role, where we fly in challenging conditions and in close proximity to mountains and other terrain, you must be able to trust the equipment, and the AW101 gives us that trust. 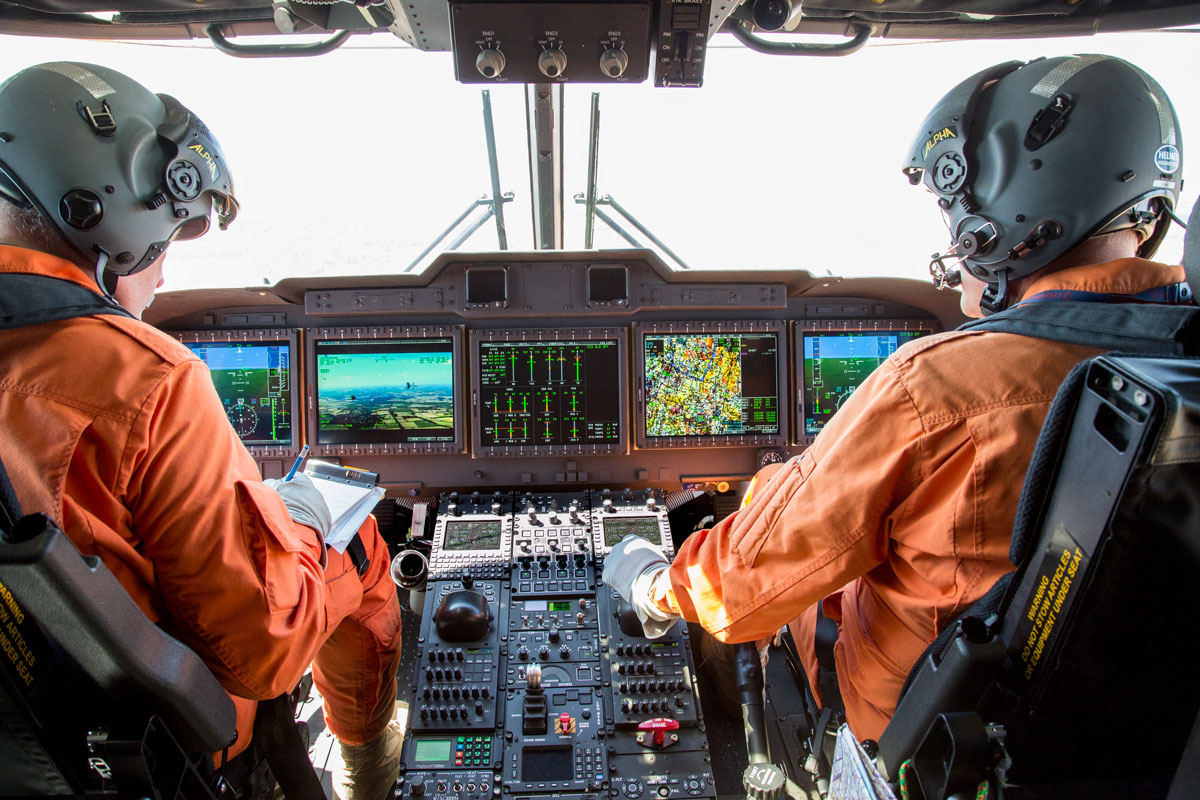 The two most important capabilities in SAR operations are the ability to find what you are looking for effectively and maintaining situational awareness. The AW101 enables us to do both.

The helicopter reduces crew workload, which means we can concentrate on flying the mission. The combination of the Osprey radar, mapping and sensors gives us a complete picture of where we are at all times. That should never be underestimated because it is what keeps you safe.

The AW101 has improved almost every aspect of Search and Rescue compared with the Sea King. In normal helicopter altitudes below 2,000 feet, the AW101 is 20 kts faster in normal cruising speed and probably around 30 kts when using maximum speed. The speed advantage increases further at altitudes above 2,000 feet, which is a big advantage in the mountainous terrain of Norway. 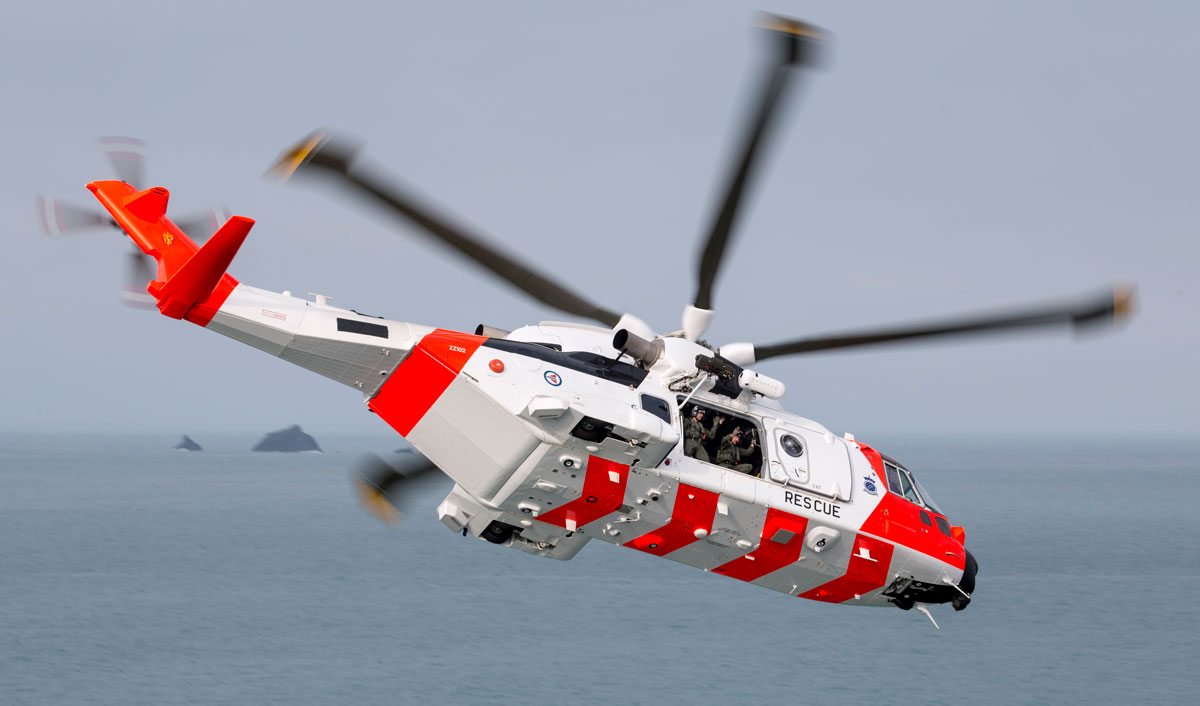 At Sola, the standard fuel on duty aircraft is 2,300 kg, which gives us about 2.5 hours endurance. The main reason for this low fuel state at Sola is because we fly frequent missions in mountainous terrain up to 4-5,000 feet within 10 to 15 minutes’ flying time from the base.

Weight and power margins will always be an issue in mountainous operations. Standard weight including SAR equipment and fuel is 14,500 kg. With a maximum allowed all-up weight (AUW) of 15,600 kg, we can carry 3,400 kg of fuel with standard SAR equipment on board. This gives us a range of 450 nautical miles compared with 400 nautical miles on the Sea King.

The SAR equipment carried on board enables us to operate safely in all the different environments, including rough sea hoisting, mountain rescue, waterfalls, glaciers and more. When casualties are on board, the medics have the essential equipment of a hospital emergency room to treat the patients in flight.

“The AW101 is like skipping at least three generations of aircraft development.”

The autopilot enhances safety when performing offshore operations to ships in marginal weather conditions. The aircraft is fully capable to fly itself into hover position alongside a ship without pilot intervention. Without visual cues for the pilot to approach a ship, the autopilot is of great help.

One of the first missions with the AW101 was to rescue four climbers stuck on a mountainside at night. Low clouds made the transit into the area difficult. By using the full capacity of the navigation systems, digital maps, radar and autopilot, we managed to make a safe transit from above the clouds to survivors. The hoisting operation was conducted almost without pilot intervention on the controls because of the accuracy of the hover mode under prevailing wind conditions (calm winds).

“One of the first missions with the AW101 was to rescue four climbers stuck on a mountainside at night.”

The Osprey radar plays a crucial role in our operations, allowing us to search for and identify small targets over a very wide search area. It effectively gives us two integrated pictures at the same time because we are able to operate two modes simultaneously. This means we can maintain situational awareness while conducting maritime surveillance. It’s a great capability to have.

Having the radar antennas mounted as panels on the side, instead of underneath the fuselage as most 360 radars would be, is a great advantage when landing in confined areas.

For all practical purposes we use three of the modes at this stage: the maritime surveillance (MS), short range awareness (SRA) and small target modes (STM).

MS is used for navigation in open water and when searching for larger targets. SRA is used for coastal and fjord navigation, and search operations. In calm seas, this is a good mode for searching as well, especially when visibility is poor. We use STM for searches when weather is such that we have clouds and difficult visibility conditions to visually avoid conflict with terrain and obstacles.

Thanks to the autopilot with the rotor de-ice capability, we can proceed more directly to incident scenes. While the Sea King always needed an escape route at low level, the autopilot in the AW101, together with rotor de-ice, enables the helicopter to recover by climbing to safe altitude. This was rarely an option for the Sea King.

The de-ice capability enables the AW101 to conduct electronic searches even in clouds and poor weather using the mobile phone detection and location system (MPDLS) or Osprey radar.

The digital moving map on board provides excellent situational awareness. With the several possibilities with overlays and screen set up, the pilots have an easy job orientating themselves, even in poor weather and low visibility conditions.

The feature of displaying the Osprey radar picture as an overlay on the DMAP is helpful during fjord navigation. Together with the 1600 radar and terrain awareness and warning system (TAWS), the crews are informed of any terrain, obstacle or other things that may be a conflict during low-level navigation, even if one system fails. The automatic identification system (AIS) as an overlay also helps situational awareness regarding surface targets onshore and offshore.

Both the navigator and one of the pilots can see the same picture on the screen, which makes it easier to discuss tactics and strategies during SAR operations. The AMMC integration, giving only one pilot the opportunity to see DMAP or RADAR, is however a limitation.

To simplify navigation and positional awareness, the avionic systems on board are quite helpful during search missions. The electro-optical sensor system (EOSS) has already proven efficient during searches. An AW101 crew was able to spot and locate a missing person after the police had used a drone to search for quite some time, concluding that the person probably was not in the search area.

The AW101 used the EOSS for about 15 minutes and found the missing person well within the search area. The laser integrated in the avionics suite is also helpful in keeping targets on the screen, and the pilots can see where the EOSS is pointing constantly. Being able to slave the TRAKKA searchlight to the EOSS is also a helpful tool to identify possible targets at night.